If you've done much programming, you probably already know the basics of this. Road maps can be represented, in the jargon, as "graphs", where junctions are "nodes" and roads between junctions are "edges" and the time taken to drive down each edge is its "cost". Finding the fastest route between two locations is then a matter of finding the shortest path between nodes of the graph.

Traditional algorithms for finding such routes include Dijkstra's Algorithm and the A* algorithm. If you haven't heard of those, go read the wikipedia pages - because the rest of this post is going to assume you know them!

There are several algorithms that are a lot faster and more memory efficient than Dijkstra's Algorithm. They rely on doing a bunch of time-consuming preprocessing on the graph; once the graph is processed individual queries can run a lot faster. This post is about the "contraction hierarchies" algorithm, one of the simpler algorithms that does this.

This algorithm isn't my invention - it was proposed by Robert Geisberger, Peter Sanders, Dominik Schultes, and Daniel Delling of Universitat Karlsruhe - and I can't guarantee Google use this specific algorithm. I'm sure they use something similar, though!

We preprocess the graph by "contracting" the nodes one at a time.Wondering how we choose the order? Read on to find out We number nodes in the order we contract them. To perform the contraction we work out every shortest path between the node's immediate neighbors and insert "shortcuts" for them, then we mark the node as processed.

Here's a simple graph, before and after a node is contracted:

Contracting doesn't completely delete a node - but the node can be ignored for the rest of the contraction process, because when we see an edge going toward C we know there's either a shortcut or it isn't a shortest path; either way, we don't need to visit C. If we do a search that starts or ends at C we'll still be able to find it - you'll see how later in the post.

What about when there are two routes to an end point, both routes exactly the same length? If you want to find all such routes, you should insert a shortcut whenever it's the same length as the shortest path; if you don't want multiple results, you only need to insert shortcuts when they're the only shortest path. Two routes exactly the same length is unusual with the way roads are usually laid out in the UK, but it might be relevant in cities laid out as grids, or when pathfinding for video game AIs where the game uses a grid layout.

A visualisation of the contraction process

As this is implemented in three.js you should be able to scroll around with gestures, or with your mouse or keyboard - give it a go!

So how come the nodes get contracted in that order?

Papers on the algorithm have evaluated several heuristics to choose node orders.

We also try to keep contraction depths roughly even across the map - if you had a hundred nodes in a row and you contracted them from right to left, you wouldn't have to add any shortcuts - but to path from one end to the other you'd have to visit every node. On the other hand if you contract every other node the contracted graph will look more like a binary tree, and the search process will have to visit fewer nodes.

There are a bunch of other heuristics you can apply - see the paper linked above for examples.

To find the shortest path between two nodes we perform two searches - one from the start node, one from the end node - then we see where they meet. Let's assume we want to find the route between node 1 and node 8.

Search from the start node

The search is similar to Djikstra's algorithm - but with one extra rule: We only follow edges going to nodes with a higher contraction order than the current node. In our visualisation, this means we only ever follow edges that slope upwards:

Search from the end node

Combining the forward and reverse searches

We take the lists of nodes visited in the forward and reverse searches and find the intersection.

If the result sets had several entries in common, we would choose the one with the lowest cost.

Visiting eight nodes out of ten doesn't seem like much of an improvement?

Right, but drawing ten nodes makes for a simpler animation! Let's look at a 40x2 grid, with a total of 80 nodes:

The first search sequence visits 11 nodes, the second search 13. That's a total of 24 nodes out of 80 visited, to discover a path 39 segments long.

So what would a search of an entire country involve?

I live in the UK, so I've been processing OpenStreetMap data for the UK.

Below you can see the two searches required to find the shortest path between Albert Drive in Glasgow and Herbal Hill in Islington, London. The map is shown as a png because the interactive map usually gives me an 'unresponsive script' warning. 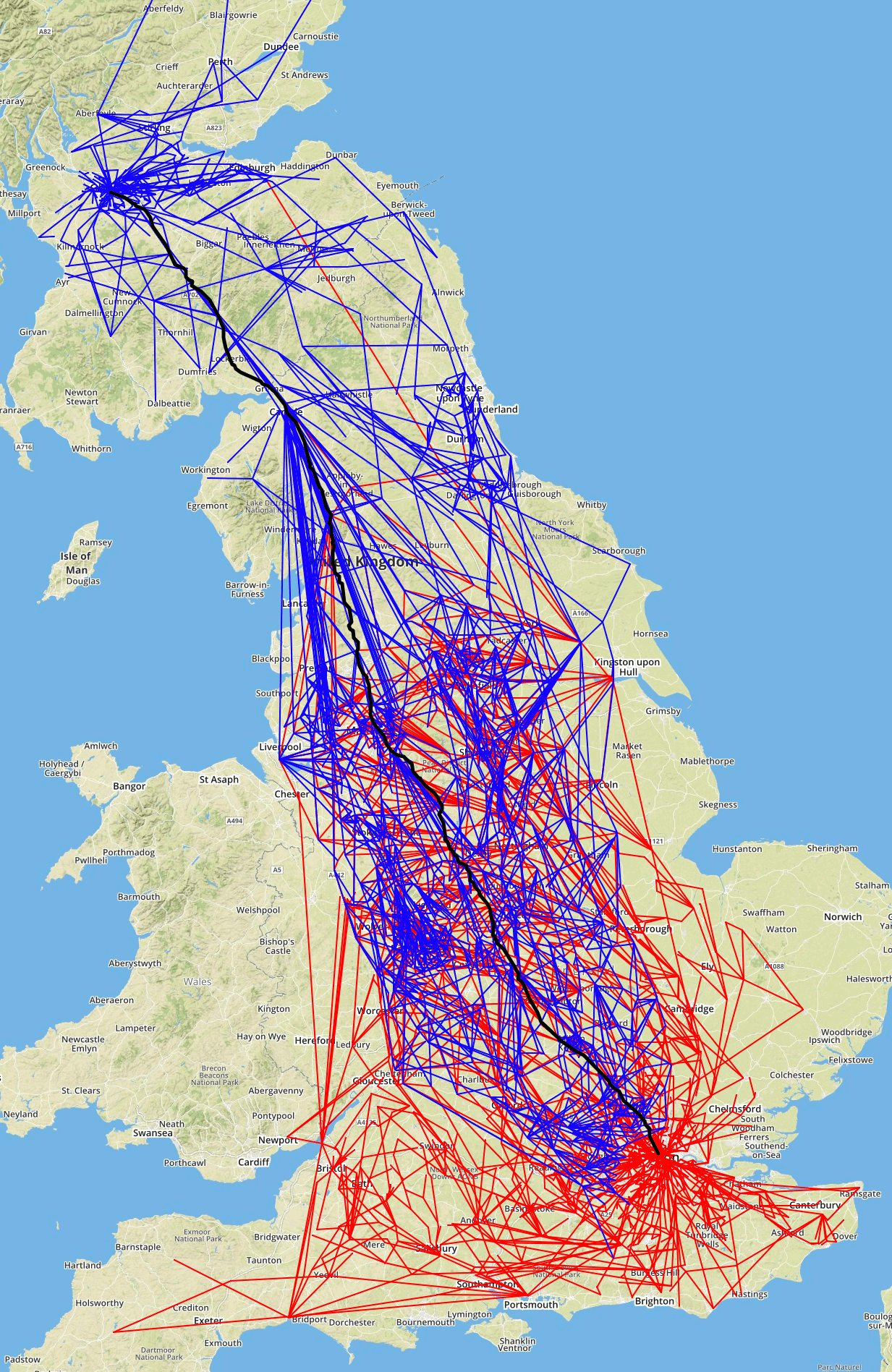 The searches from London and Edinburgh visited at 3,968 and 3,113 nodes respectively, and the solution path found passed through 3,617 nodes.

For my implementation, the search process took 18ms - plenty fast enough for the 500ms response times Google provides! Contraction for the UK took 55 minutes using a single core on a modern i7 processor, and needed about 10 GB of RAM. You could make the process more RAM- and CPU-efficient if you wanted to!

The contraction hierarchies algorithm is actually fairly simple, and makes path finding very quick - easily below the 100ms industry standard for web pages. If you only want to know total travel time, you have to visit fewer nodes than there are in the path!

The animated 3D graphics were made using three.js - previously my only 3D experience has been with JOGL and I have to say I found three.js a lot easier!

At the time of writing, there's an OpenStreetMap fundraising drive to upgrade a database server? I couldn't have written this post without their map data, and the project has an annual budget of just $85k. Maybe you'd like to donate?